All Collections
Getting Started
Glasgow Rocks Training Load, intensity, and ACR monitoring in the OTC

Read about how you can apply Athos technology to help keep your athletes game ready.

Athos allows teams to track the amount of internal load placed on athletes  leading into games. This information allows coaches to make changes to their programming in order to have their athletes game ready without being overly fatigued. The difficulty of a training session is a combination of volume and intensity. Athos Training Load represents the accumulation of muscular stress quantified as the normalized EMG signal over each session. This Training Load may be accomplished with various intensities (such as a squat at 50, 75, and 100%). The intensity break down and volume of sessions can be used by a coach to verify and plan programming so athletes are prepared for games.

The acute:chronic Training Load ratio provides a single number that represents how much load has been placed on the athlete recently (3-7 days) divided by the chronic average (7-28 days). This number has been shown to be predictive of injury risk (Hulin et al., 2016). The recommended range of ACR values is 0.8-1.2, with lower values meaning the athlete is being rested (this may occur during the championship season or a taper), and higher values meaning the athlete is building fitness. Values above 1.2 are not immediately indicative of injury, but provide a yellow flag for a coach to make alterations to programming before the real ‘danger zone’ of > 1.5. Values below 0.8 do not necessarily mean injury is imminent, but the athletes are training at a much lower volume than before and may be losing fitness.

The anatomy of a game: Be Prepared

When we think of being game ready, the athletes need to be prepared for the demands of a game. The figure below shows the ‘anatomy’ of a typical game:

Below is a figure showing Training Load (height of the bar) as well as the volume of training load within different intensities (dark blue = high, blue = medium, light blue = low), These data were collected on a professional basketball player who wore the Athos garments in the practice the day before a game and the game itself. The Training Load for practice was much lower than the game. This is exactly the trend a coach would expect if they wanted to rest an athlete prior to performance. The volume of Training Load in the low, medium, and high- intensity zones are all lower in the pre-game day. The volume on game day provides an accurate target of game demands that a coach can plan for during their conditioning days. 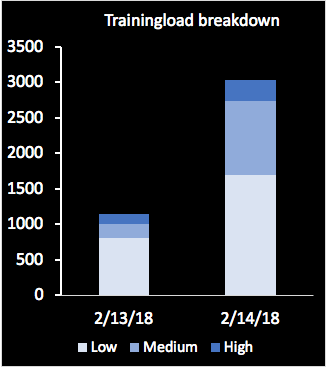 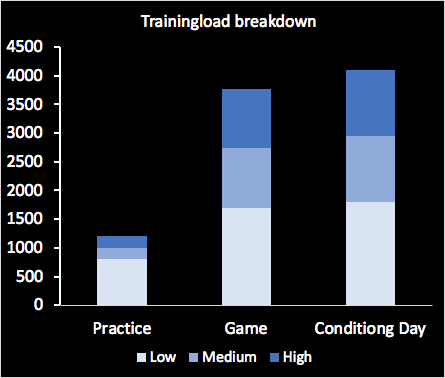 The above plot shows three days: a pre-game day (2/13), which has a low total volume by reducing the time and intensity of practice. The second day (2/14) shows a game, which was a greater load than the easy day. Lastly, a conditioning day is shown where the total Training Load during a practice exceeds the demands of a game both for intensity zones and total volume.

Switching to the team view: Periodization for optimal performance!

We can ensure the athletes are prepared for games by having practices that accumulate more Training Load and high-intensity Training Load than the games themselves, followed by enough rest to recover for the game. Along the same vein, an athlete wishing to race a half marathon needs to complete more total volume than the half (for example, 15 miles), so running at a high intensity at the end of a race is not foreign.

It is critical to periodize both intensity and total load (volume) going into a game. The above plot shows an ideal periodization scheme, where the practices on 2/10 and 2/11 challenged the players more than games, but 2/12 and 2/13 provided enough rest so they would be game ready.  ACR on the team dashboard in the OTC shows the team's current average ACR and provides one number that can be used to understand if periodization is appropriate leading into the game. 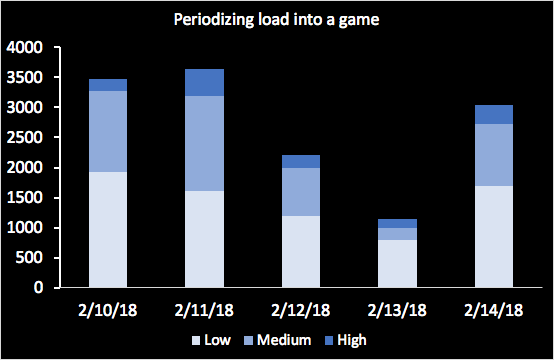 For example, the following figure shows the team dashboard on the day before the game. The athletes are in a prime position to play since the ACR is between 1-1.2 and Training Load is trending down (as the athletes rest).

In contrast, the load leading into a game may not be periodized ideally. For example below, the athletes had a recovery day on 3/10 and the coach increased the load on the athletes following that recovery day. The athletes were not rested enough for their game on  3/14.

On the day before the game, the team dashboard in the OTC will look like this: 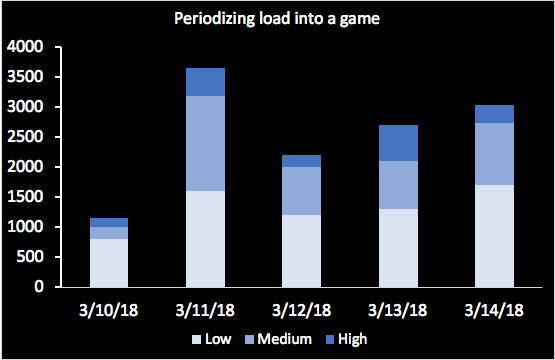 Where the team average ACR is quite high (1.5) for the day before on a game due to the increased Training Load.

Team ACR: How is the team’s long term programming going?

To get an idea of exactly how much volume your team needs on a given day, coaches should refer to 2 main quantities: 1) the demands of the game, and 2) the team acute to chronic ratio (ACR). 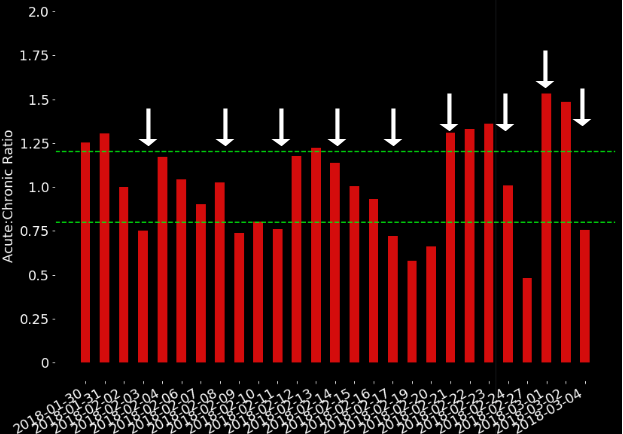 The above plot shows a daily ACR value for a different team. As expected, the ACR oscillated to accommodate game demands. Each arrow indicates a game, and ideally the coach wants to see a decline in ACR for the day or two prior to a game. This happens nicely for the games on 2/03, 2/08.

Coaches can easily identify if any individual athletes are outliers from the team Training Load in each zone or team ACR. The athletes will be color coded green if they are similar to the average intensity in practice, yellow if they fall outside a small range, and red if they were extremely different from the rest of the team.

If an athlete is too far from the team average ACR, it may indicate that athlete needs more rest (if their ACR is high) or more practice (if ACR is low).