All Collections
Coaching With Athos
How did athletes handle practice? Dig deep with contributions and ratios

How did athletes handle practice? Dig deep with contributions and ratios

This article will help you better understand the practical application of Athos muscle contribution, imbalance and ratios.

Athos’ ability to quantify the stress placed on specific muscle groups differentiates it from other products; which attempt to infer muscular stress from external loads.

If athletes all perform the same set of drills during practice, they may be required to have the same external load, but the internal load on each muscle may be vastly different between athletes. Athos quantifies specific metrics (overall imbalance, quad/hamstring ratio, anterior/posterior ratio) to let coaches identify which athletes may be at risk from a muscular contribution standpoint. Overuse injuries can arise due to suboptimal movement patterns (e.g. overuse of the hamstrings for hip extension). Using Athos, coaches can identify these imbalances and correct them with weight room training (to increase strength and improve control of the muscle throughout its range) as well as using the mobile application for biofeedback.

Overall imbalance is a single number to represent the difference between the left and right sides of the body. If an athlete is totally balanced, they will receive an overall imbalance of 0. As one side gets used more than the other, this number will increase. We will provide a yellow flag if imbalance is above 0.2 and a red flag above 0.4.

Quadriceps to hamstring ratio is a ratio of the stress from the quad divided by the stress from the hamstring. The ratio of strength of the quadriceps divided by the strength of the hamstrings is a biomarker of injury risk. If an athlete routinely stresses either muscle group too much, this will result in greater strength disparity and could lead to increased injury risk. The ideal range is between 1.0-1.6, yellow is 0.6-1 or 1.6-2 and red below 0.6 or above 2.0.

Glute to hamstring ratio allows coaches to see where the posterior load is being placed. The glutes have a greater force capacity than the hamstrings.  Greater use of  the glutes results in a more efficient and explosive movement. Ideal values are ratios greater than 1.0, 0.6 to 1.0 are yellow, and red is below 0.6.

Anterior to posterior ratio is a measure of the front leg muscles over the back leg muscles or quadriceps/(hamstrings+glutes), this ratio should remain near or below 1. Too much anterior stress can lead to the athletes having lengthened hamstring muscles, which connect to the back and can cause low-back or hamstring injuries. Ideal values are below 1.1, yellow 1.1-1.5, and red above 1.5.

When you land on the Athos Team page, you can select a date to view in the top right hand corner of the screen.

This view will show how many athletes were flagged for a given ratio. Acute to chronic ratio (ACR) is covered in another article, so the focus of this document is muscular imbalances, quad:ham, glute:ham, and anterior:posterior ratios.

Looking at the overall imbalances, we can identify which athletes were biased towards one side. In the below plot, we see one athlete is clearly over stressing muscles (the white point beyond 30% right) on their right side. Athlete 1 as ‘at risk’ due to a red flagged L:R imbalance of 33% to the right. This athlete can be identified and decisions made to alter their post practice rehab, weight room activity, and/or having a conversation with this athlete.

Following a few days with this trend, the athletic trainer had the athlete rest and programmed single leg ankle stability exercises to improve strength and control on the left side.

Another athlete was flagged for anterior posterior and quadriceps:hamstring.

Having knee extensors (quadriceps) that are substantially stronger than flexors (hamstrings) is a risk factor for ACL, low-back, and hamstring injury. From this knowledge, our anterior:posterior ratio provides insight into the relative load between theanterior and posterior sides. Ideally, this value should be below 1.1. If values are routinely above 1.1, the athlete is stressing their anterior muscles more frequently, which will likely lead to strength imbalances. Below shows a single practice for 6 athletes. 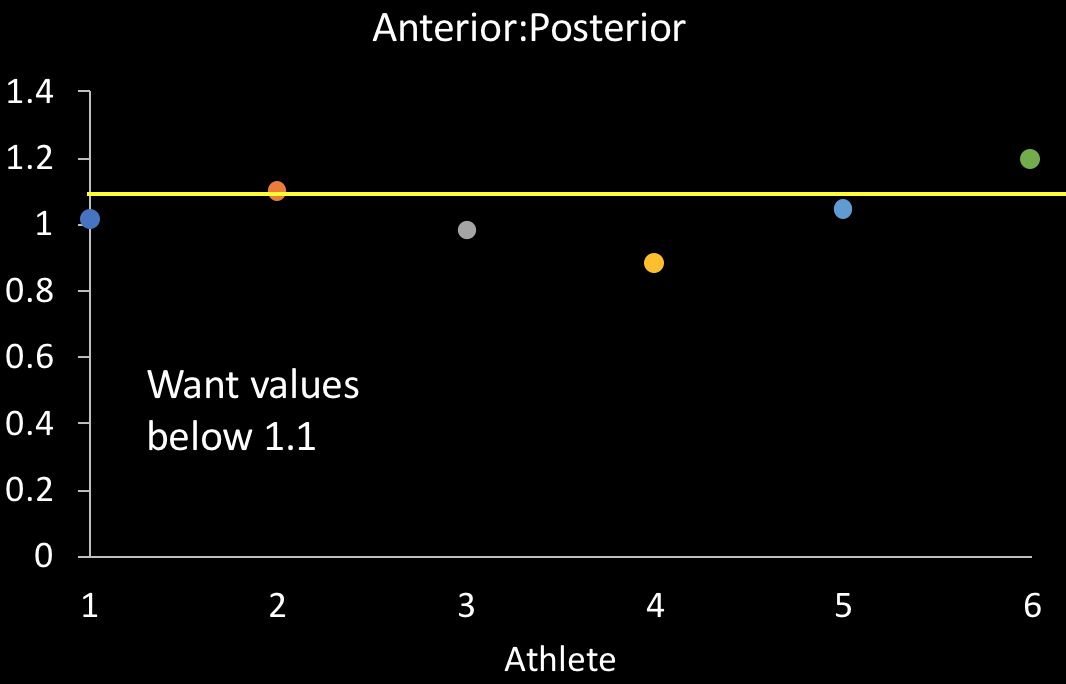 The anterior:posterior is a useful tool and can be actionable by programming more posterior training in the weight room to combat the excessive stress on the quadriceps. All of these athletes, except athlete 6, are in their target range. This ratio, however, is not the whole story. The glutes and hamstrings contribute to the posterior load of an athlete, and more explosive athletes tend to preferentially use their glutes because they have a greater force capacity.

The same athletes’ glute:ham ratios are plotted below. 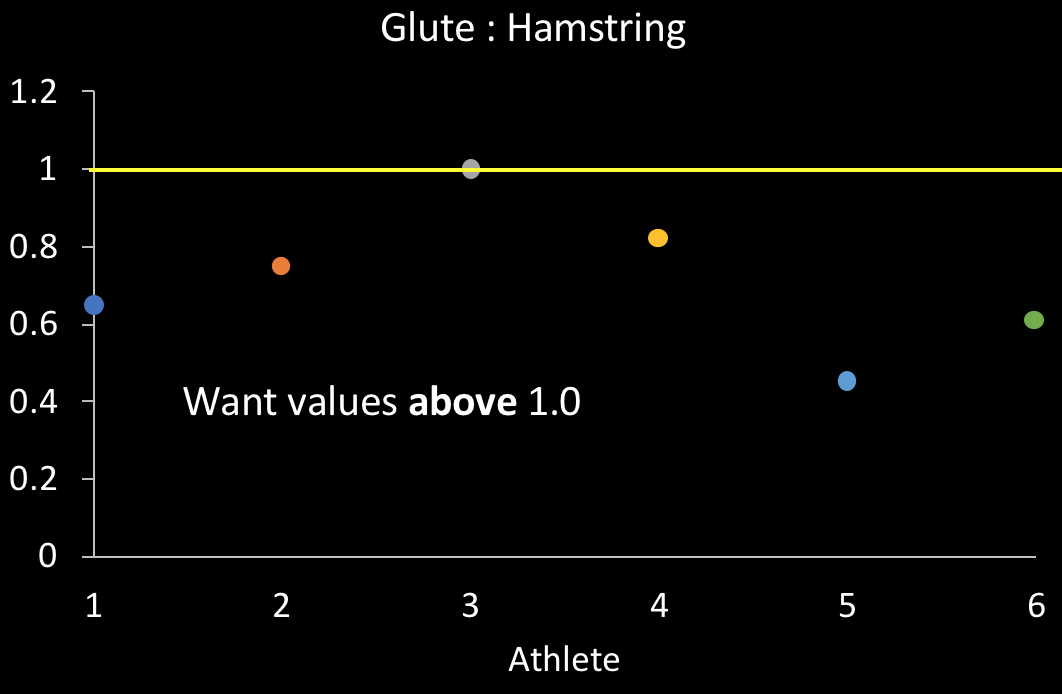 The glute:hamstring ratio should be checked following inspection of the anterior posterior ratio. If the AP ratio is < 1.1, check for a glute:hamstring ratio above 1.0. If this value is lower, the athlete may require some activation drills and the Athos app can be used to provide biofeedback so the athlete can see which muscles are being activated during specific movements.

For the same session, athlete contributions can be easily identified as optimal (closer to the glute dominance) versus heavily relying on quads and hamstrings. The upper right red dot represents the team’s star athlete, Kieron, who heavily relies on his quads and hamstrings. This athlete also commonly complains of low-back pain. This is likely due to anterior pelvic tilt causing lengthening of the hamstrings and a heavy reliance on the quads. 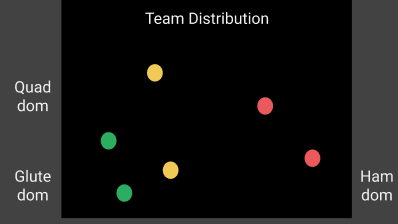 The general tendencies of these values can be seen in this above plot.

Once you have discovered a movement pattern from an athlete that is flagged, what should you do next?

You can take Athos into the weight room and use live view to provide the athlete biofeedback during pivotal movements that you program to prehab the athlete.

For example, if the anterior:posterior ratio is below 1.1, posterior chain exercises such as deadlifts, hang cleans, and kettlebell swings should be performed with Athos app using biofeedback to make sure the athlete is activating the correct muscles.

If the glute:ham ratio is too low, biofeedback can be used during functional movements to ensure the glutes are being activated. If they do not light up, the athlete may require additional training to activate the glutes. An example is shown below. 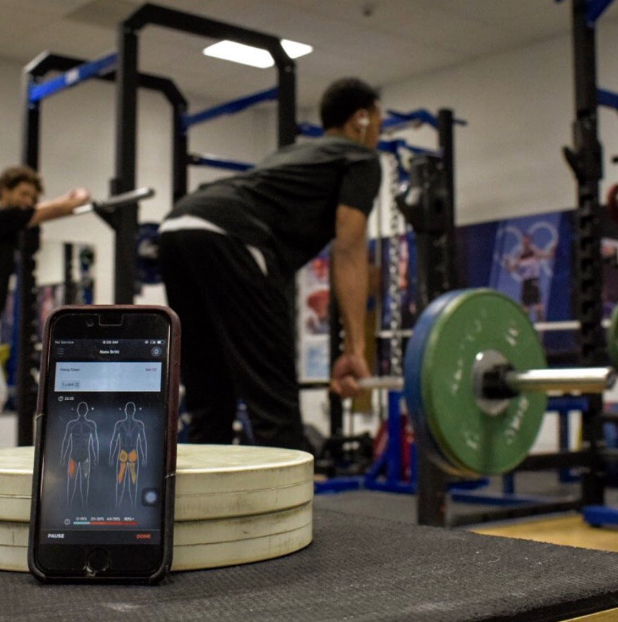