All Collections
Coaching With Athos
Training Load and Human Performance

Understanding how to use Athos Training Load to make decisions with athletes both in and out of season.

Why we manage load

Prior to and during the season, a key piece to the success of a team is load management. Load management is a relatively new concept where coaches attempt to measure and understand the physiological strain that training is placing on athletes.  It ensures that players can handle the demand of their hardest games, without the risk of overtraining, fatigue, or even injury. Managing load is complex. Doing too little can leave a team exposed to reduced performance and injury from underdevelopment, while doing too much can run the team into the ground putting key players at risk or unable to perform at their best when it really matters.

Internal vs. External measures of load

Many teams track training load through external measures like GPS and accelerometry. These are deemed external because they quantify the amount and nature of the movement that the athletes perform.  Additionally internal load looks to measure what is happening inside the body and includes measurements like Rate Perceived Exertion (RPE) and Heart Rate. Athos Training Load is also an internal measure of load that is highly correlated to RPE (see figure 1).  Athos Training Load quantifies the accumulation of muscular stress during training -- regardless of the type of movement the athletes have performed. We all know that muscles play a critical role during training; they enable all movements including offensive lateral cuts leading to breakaways, they help the body withstand collision, and propel an athlete through the finish line.  Understanding the stress muscles endure and how the body is adapting to the demands of training is a critical piece to the load management puzzle.

Figure 1: where is this from originally? (I took this from Nike deck) are we missing a y-axis and key?

Athos Training Load is unique because it enables the quantification of the stress placed on the body in the weightroom, in-game and in the training room where heart rate might not capture how much stress was put on the body and where GPS underestimates load because of the lack of movement.  Adding in Athos Training Load completes the picture.

To prepare for the upcoming season, our teams are using Athos Training Load to better understand the impact of training and performance. Our coaches are diving into their load management plans, understanding how their players are responding to plans, and what individual vs. team-wide tweaks can be made to prepare for the load of the upcoming season.

Coming into the pre-season, it is key for coaches to understand an athletes’ level of conditioning. By assessing muscular function in conditioning tests, it is easy to identify the players who might be able to complete a task but have to work harder than their teammates. In figure 2, a team ran 10 x 60 yds where each 60 yd run was to be completed in 60 seconds. While each player successfully completed the timed conditioning test, Player X stood out. Player X’s conditioning test showed  higher load than the team average, helping the performance coach to understand that the player may not be conditioned properly. Based on the Athos Training Load coaches decided that this player needed a modified aerobic plan for the first few weeks of pre-season.

Over the three weeks of focusing on Player X’s fitness level, Athos Training Load was used to monitor his changes in load and how he compared to the Average Training Load of the Team. With focus on aerobic conditioning, plus sleep and nutritional support, the player adapted to the recovery enhancements and was ready to progress with the team (see figure 3).

As pre-season came to a close, tracking training load in game was critical for the team to understand how their players were responding to the demands of a season. Figure 4 shows the first four games comparing Athos Training Load (Internal Load) to the Athos Motion Load (External Load).  These 2 measures add context to what occurred during these games making it easier to make load comparisons. Focusing on the first 2 games, both Training Load and Motion Load map similarly. However, in the third game, motion load is similar while Athos Training Load, has decreased. In this case, the output (external load) was comparable but required less muscular stress.  In the fourth game, Motion Load slightly increased in comparison to the first three games, while the Training Load matched that of the first two games. The demand of the player was similar to the first two games, but externally more ground was covered. The 4th game saw more distance, higher speeds, while the stress on the body did not increase. This showed coaches that their pre-season program prepared their team for success where they were able to balance between performance and fatigue. The team was successful as these first four games all resulted in wins starting out the season strong.

By quantifying and understand the demands of a game or hard practice, coaches can better plan for and adapt their programming to match the load demands in and out of season. Athos Training Load not only quantifies players’ responses to training to view periodization and percent of training load baseline, but it also shows the players’ adaptation to training. When the body adapts to movement progressions and total volume load, the internal muscular stress will decrease, suggesting that adaptation has occurred. While the internal training load measures when less muscle activation is required to do the same amount of work due to progressional gains, conversely internal training load will increase  when the body is working harder to complete the same outputs, most commonly seen with fatigue and overtraining.

Let’s look into both examples. Here in figures 5 and 6, a team compared their summer and camp training loads to their previous in-season average game load, 2600. During summer training, each day the team exerted more stress than their game load where the highest day,, Friday, resulted in 82% more training load than their average game.  The purpose of this training block was to increase strength, power and speed. Moving into camp, the external loads were not adjusted or reduced, and the team maintained lower training loads each day of camp. Looking at figure 6, the highest training day, Saturday, resulted in 10% more training load than their average game. The progression of the program accompanied by  decreased demand on the players shows successful adaptation signaling readiness for the season and higher demands of training. 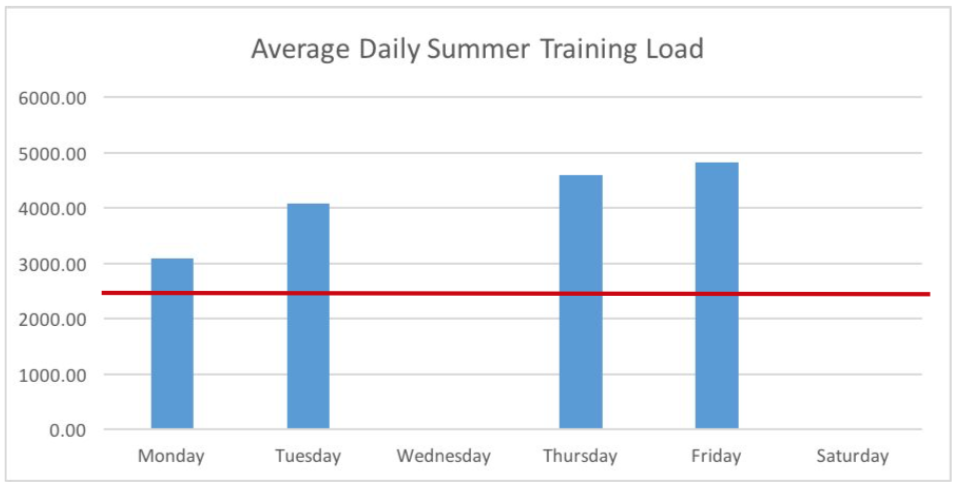 Generally, as the season begins, the team is split into a first and second team. In a sport like basketball, where multiple games are played each week, the active minutes of a 1st and 2nd team show a large discrepancy. It is critical to keep the 2nd team in tip-top shape so they can be as ready to perform as the 1st team in the event of injury. Looking at figure 7, a basketball team saw their 2nd team’s loads consistently higher than the 1st team, though the practices were identical. The coaches knew that the decreased court-time was impacting the fitness of their 2nd team and decided to add more aerobic conditioning to the end of practices to ensure they were ready to perform.

While every team has different demands during the season one thing is shared - being prepared, and staying prepared to compete is something all coaches are trying to solve. The more we can understand the toll on the body and correlate that with the objective outputs the more we will be able to adapt our training to drive success.

Lastly, looking at game schedules and how the team responds to the demands of the season schedule is critical. Figure 8 shows two weeks consisting of practices and four games, two Wednesdays and two Saturdays. Comparing the Wednesday to Saturday games, there is a clear difference in the stress the Saturday games are placing on the team. Over these two weeks, the maximum team training load for a Saturday game was 5300 where the previous game that week, Wednesday, had a training load of 4100. Then, looking across both weeks, the demands of both the Wednesday and Saturday games were higher than the previous week. The minimum team training load in-game, Wednesday, went from 3800 to 4100 the following Wednesday. Looking at the increased training load from Tuesday and Thursday practices on top of Wednesday’s game, the team saw an increase in training load and added a recovery day before the Saturday game. The team won the game and  although there was an increase in the training load, the demand would have been even higher on the athletes if the signals of their internal responses were not taken into consideration.